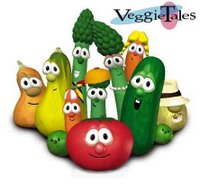 And no, I am not talking about the killer spinach.

Apparently Veggie Tales is being aired on NBC and Christians are up in arms that content related to the Bible and God is being edited out.

"Had he known how much he'd have to change the show — including Bob and Larry's tagline, "Remember kids, God made you special and he loves you very much," that
concludes each episode — Vischer said he wouldn't have signed on for the network
deal."

Okay. When will Christians learn that the world-at-large isn't going to do right by them. Vischer, in my opinion, made a huge mistake by not discussing such issues before any contracts were signed. "Hello? McFly?" If you'd like to read the whole article, click here.
Posted by What Would Jesus Glue? at 1:14 PM