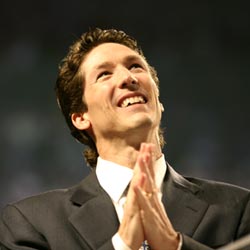 "Osteen has done more than anyone to spread the prosperity gospel into the Christian mainstream, says journalist Van Biema. His article in Time cites a recent survey that found 61% of American Christians believe God wants them to be financially prosperous. "The more shocking finding from the study is that 31% of Christians think that if you give God money now He will return it to you later, in spades, so to speak," Van Biema says.
"That really is not part of standard, orthodox Christianity," adds Van Biema. "There had been some brakes on (Christianity) moving toward materialism, but those brakes are gradually being released and you're seeing more and more people saying 'Well, why wouldn't God want us to be rich in this lifetime.'"

This is a huge problem in the church these days. I don't know where they are getting this stuff. Jesus was the Son of God and he didn't have two nickels to rub together. You can read the rest of the article here.
Source: msn.com
Posted by What Would Jesus Glue? at 11:47 AM