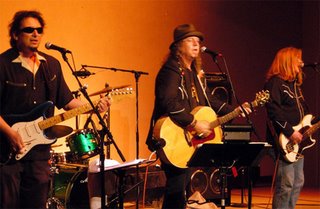 Yeah! Last night, Sarah and I attended a concert by the legendary Lost Dogs. For those of you who don't know them, let me introduce you. From left to right: Michael Roe (The 77's), invisible Steve Hindalong on drums (The Choir, City on a Hill), Terry Taylor (Daniel Amos, Swirling Eddies), and Derri Daugherty (The Choir). It was a great night. These guys are all fabulously talented and funny as crap! Sarah enjoyed it a great deal and told me that she wished they had talked more because they were so funny. It's true. Mike and Terry traded bons mots back and forth. They covered subjects from the Tribulation to Derri being the girl of the band. I have a bit about "on-the-road snacks" on video and I'll post it if someone can tell me how to convert Quicktime video so I can edit it in Windows Movie Maker. One of the funniest bits they did had them rating themselves from being anointed to in the flesh with the Throne Check-O-Meter. Good stuff.
But in the end, it's the music that drew me there. These 4 guys are responsible for some of the greatest music ever recorded and performed in the world. Mike Roe is one of the greatest, yet unappreciated, guitarists around. It was a shame they had Derri on bass because he is also a guitarist w/ a unique style. There were so many songs I wanted to hear but they couldn't do them all in the 2 hours they played. They did do Blessing in Disguise which is one of my favorites.
They played at Calvary Fellowship in Mountlake Terrace. (Mike said, "Welcome to the most professional show in Mountlake Terrace tonight...welcome to the only professional show in Mountlake Terrace tonight.) Today they are headed north for a Calvary Chapel Pastor's Conference. Mike said that they were going to do the same show sans all the dirty jokes. Terry said that he was going to rebuke the pastors. These dudes are crazy. They embody the image that Christians don't have to be stuffy, legalistic, judgemental turds.
Long live the Lost Dogs!

PS: Check out my photo site. I will post some more shots from the show when I get a chance.
Posted by What Would Jesus Glue? at 10:54 AM

you nailed it, bro. the Dogs are certainly some of the most talented musicians around, but the best part of their live shows is the witty banter between the guys. they have such a great relationship with one another and it shows on stage. glad you were finally able to see them in person!