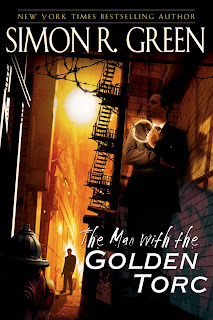 "From the New York Times bestselling author of the Deathstalker and Nightside series comes a new kind of hero in an old kind of war.
All those things you hear about as a kid? The boogeyman under the bed? The creature in the closet? They're for real, people.
Eddie Drood knows they're for real. His family has kept humanity safe from the things that go bump in the night. For ages, they've held back the nightmares, locked the doors, barred the gates, and put righteous boot to monster arse on a nightly basis.
But now Eddie's in trouble. One of his own has convinced the rest of the family that Eddie's become a menace, and that humanity needs to be protected from him. So he's on the run, using every trick in the book, magical and otherwise, hoping he lives long enough to prove his innocence. And he knows how dangerous the Droods can be-because he's one of them."*
The overall premise of this book (and future ones I'm sure) is simply this: What if James Bond existed in a world of magic? Pretty straightforward. Secret agents in a Harry Potter world. The only reason I picked this up is because I am a fan of Green's Nightside series. This series might draw me in. The story was pretty so-so but it picked up at the end and I can see where it might become a good series. Even Nightside's first book was only so-so but the plot arc introduced gave me hope for a future of better stories and they did get better. So, I will look forward to seeing more from this magical 007 in the future.

*From the dust jacket.
Posted by What Would Jesus Glue? at 12:41 PM