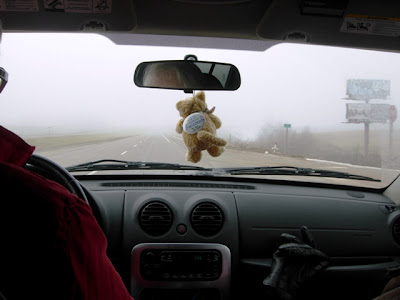 The Mist (12/21/07)
We woke up less than bright-eyed and nowhere near bushy-tailed. We washed up, put on the same clothes from the previous day and got some breakfast at the St. Louis Bread Company. After sustenance, we caught the shuttle to the airport and got filled in on the local gossip about some football player from the area. The lady giving the info was bending the ear of the shuttle driver who repeatedly responded with a hearty, "You're kidding!" We finally arrived at the airport knowing much more than we cared to about this fellow and proceeded to check in. There was still no word on our luggage but the Great Lakes people were great to us and said they'd be on the lookout. We tried talking to American again but it was just more stupidity and rudeness. To top it all off, we were flagged by security and had to do the full pat down, go thru your bags routine. We finally found our gate and the information that our flight was delayed another 1.5 hours due to the fog. This fog is like some supernatural beast trying to keep us out of Iowa. I think Stephen King wrote a book about it.
Our flight finally took off at 12:30 and we arrived in Burlington, IA. The airport was small and I mean small. The guy put all the bags out and ours weren't there. We filed a claim with the Great Lakes people who continued to be super nice and we headed out towards Solon.
On the way we stopped at Goodwill and Wal-Mart to get some clothes, undies, socks, toiletries and the like. After a great buffet dinner at the Pizza Ranch (good fried chicken), we headed home with her parents. We caught up, cleaned up, called to check on our luggage again (no luck because the fog continued and flights into Iowas continued to be cancelled) and finally went to bed.
Posted by What Would Jesus Glue? at 3:52 PM