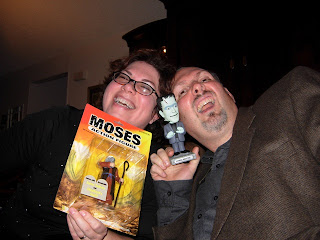 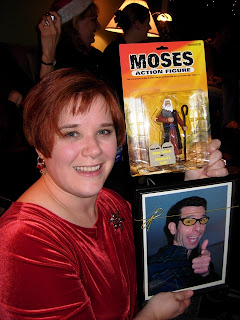 My friend Marshall sent me this link which has the definition for white elephants. Thanks Marsh!
The bleached pachyderm party on Saturday night was alot of fun. We met some new folks from church, ate great food and had great fun. The white elephant portion of the evening was pretty funny. Sarah stole the Moses action figure and I originally ended up with the portrait of Bob but our friend Mary stole it from us so that we could get something else. That was very nice. I stole the Herman Munster bobble head that you see in the pic above. That's Joan holding Sarah's Moses (who now has a place of honor atop her dollhouse). Someone else got a Deluxe Jesus action figure with glow-in-the-dark hands. Good stuff!
We have one more white elephant on Wed. morning...a brunch work party at the Edgewater Hotel. They have awesome food! Last year I scored the awesome Jesus/Mary clock. Here's hoping I score something equally tacky this year. I can put anything in our studio. It's a hodge-podge of weirdness.
Sunday found us at lifegroup in the afternoon where we enjoyed good food and good company. later in the afternoon, we sang some carols accompanied by young Ian and Erik on the violin and cello. After that, we shared Christmas memories and said our goodbyes. It was a nice day.
It's so great to have friends especially around the holidays. Our first Christmas here was nice but we didn't go to any parties or anything because we didn't know anyone. I'm glad we've found a community to be a part of. Even a Scrooge like me likes a bit of social interaction once in a while.
Posted by What Would Jesus Glue? at 9:42 AM