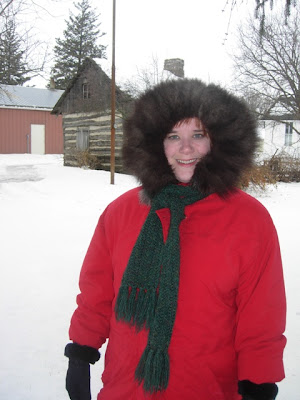 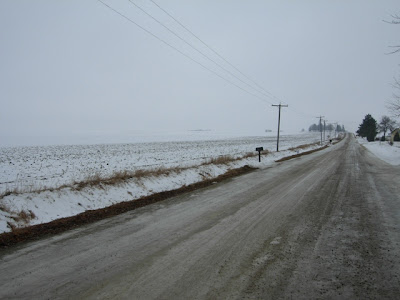 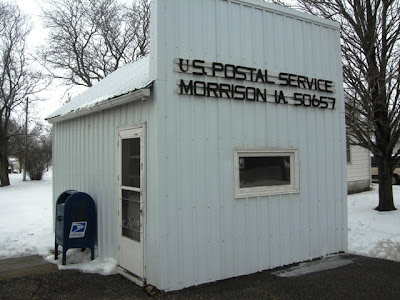 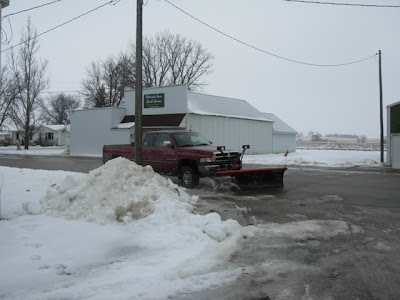 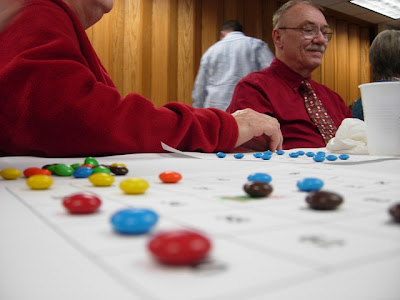 Blizzard (12/22/07)
The next morning we drove a couple of hours to Morrison, Iowa for the family Christmas. The trip started well but the fog continued to plague the state. When we arrived I found that we were having the party at the town’s museum. The town was small…probably 4 square blocks. After we arrived and I met some of the family, Sarah and I went for a walk around the town. I took some pictures and experienced the cold for the first time. My face was extremely numb. I don’t know for sure what the temperature was but it was 7 degrees when we left Solon. I’m sure the wind chill took it down below zero. We arrived back at the museum and the family drifted in one by one. We had a good lunch, exchanged gifts and played M & M bingo. Since our gifts were in our luggage I drew funny pictures of what they would have gotten if American Airlines hadn’t lost our luggage. They loved it!
Later, as the snow began to fall and the winds picked up to around 40 mph, we decided to head back to Solon. On the way back I got to experience a blizzard for the first time in my life. Up until that time, a blizzard for me was an ice cream dessert at Dairy Queen. Well, I'm here to tell you that driving thru that puppy was no fun. Sarah's mother told me not to be scared but that reassurance didn't help when she decided to hightail it thru the storm and take on any and all snowplows along the way. It's a wonder my hair didn't turn whiter than the new fallen snow.
On the way back, we decided to stop off at the Cedar Rapids airport because the Burch’s friend Ruth had heard that the St. Louis airport was going to bus a bunch of luggage in. We pulled up to the front and went inside only to find tons and tons of luggage lined up in the lobby. I immediately got in line but Sarah and her dad started looking thru the piles and piles of bags that had been brought up. Within 2 minutes they had found Sarah’s bag so I jumped out of line and located my bag about 15 minutes later. Sarah’s dad asked if we should tell someone we got our bags but I said, “No, let’s get the hell out of here.” We called Great Lakes to tell them we found it, cursed American Airlines under our breaths and beat a hasty retreat. Finding our luggage took a load off our minds and we were finally able to get a good night’s sleep that night.
While Sarah was making a pit stop in the ladies room, she overheard a bedraggled woman on her cell phone describing their trip by bus from O'Hare. Apparently everyone who went thru there had a worse experience than we did. We are probably the only people that made it into Iowa by air on Friday.
Posted by What Would Jesus Glue? at 9:42 AM

I miss the snow & cold weather of the midwest! Thanks for sharing the photos. Hope you had a fun, relaxing trip.

i know how you felt in that blizzard...i missed alot of it but we've had over 26 inches here in boston and shoveling out your car from beneath that much snow, up to the windows, is not fun...but we did love going to the gardens and walking on the frozen pond where we had fed ducks and swans in october...