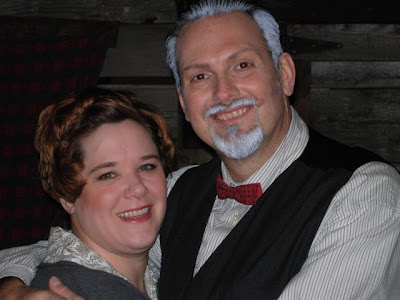 The lights are off. The set is struck. The costumes are put away. The show is over.
It is with a mix of sadness and relief that I put Winterland: The Quest for Christmas behind me. I am sad because it was a great experience with a wonderful director and a great cast of friendly folks from NW Church. I was given the opportunity to act and sing again and it was fun. New friendships were forged and Sarah and I feel even more a part of the NW family than ever. I am happy because it took over our lives for 4 months. With life not giving us a break, that made for some stressful and very tiring times. But despite my weariness, it was a great time and I wouldn't trade it for anything. Some highlights include...
- Me as Granger entering with a KFC bucket at dress rehearsal. Just look at the pictures. I look like the Colonel.
- On Saturday, between shows, a few of us got silly and started singing songs from the show in different styles with the band accompanying us. We did reggae, Beatles, Devo, Kermit the frog, James Brown, and who knows what else. It was a blast. Seattle people can be way too serious most of the time. It was nice to be able to just cut loose. At the end of the session, Joan got up off the bench she and her hubby Marshall were sitting on and dumped him on the floor. It was a great ending for a fun time.
- The lifegroups did an outstanding job feeding us. They were asked to provide healthy food for us this year and they hit the ball out of the park. My body thanks you all.
- The band, Midlife Chrysler, is in need of a new vocalist. They want me to come jam with them some time after the first of the year. I'm looking forward to it. I miss being in a band.
Well, I could go on and on. It was fun. It was tiring. We laughed. We cried. It became a part of us. And now it's over...sort of. Tonight's the cast party. One last bit of revelry before we put it behind us for good. So long, Winterland!

For more on Winterland go here and here.
Posted by What Would Jesus Glue? at 10:59 AM