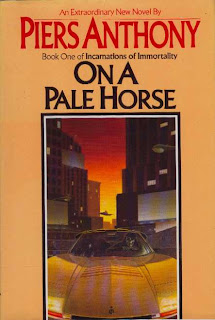 On A Pale Horse by Piers Anthony
"The Man Who Murdered Death. Shooting Death was a mistake, as Zane soon discovered. For the man who killed the Incarnation of Death was immediately forced to assume the vacant position! Thereafter, he must speed over the world, riding his pale horse, and ending the lives of others. Zane was forced to accept his unwelcome task, despite the rules that seemed woefully unfair. But then he found himself being drawn into an evil plot of Satan. Already the Prince of Evil was forging a trap in which Zane must act to destroy Luna, the woman he loved. He could see only one possible way to defeat the Father of Lies. It was unthinkable --- but he had no other solution!"*
I finished this back before we left for Iowa so this review will be short and sweet. It was pretty good but not near as great as I thought it might be. I was interested in reading it because we have been watching Dead Like Me and I had heard that the concept was similar. It really wasn't that similar. It dragged in a few places but picked up toward the end. I'm not sure if I'll read anymore in the series or not. Probably not.

*From the book jacket
Posted by What Would Jesus Glue? at 9:00 AM

I really liked this. But I have to warn you that as far as my sister & I are concerned Death is the best one in this series... If you don't like it, you probably won't like the rest... Time REALLY drags, War's pretty violent, and Earth, well there's a lot of sex in it, kinda earthy... Okay, yes that was silly, but it's true!
All that aside, We both really liked the Earth one, and the Fates one is very good- probably my second favorite after Death. The last two: God & Satan, I did NOT like.