An Afternoon in Ballard 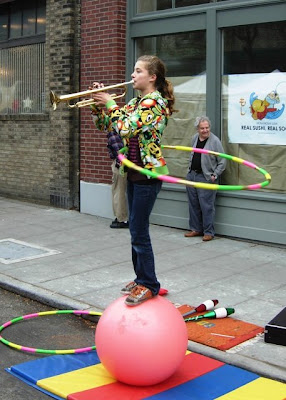 Sarah and I spent a nice afternoon in Ballard on Sunday. We went mainly with the intention of seeing Quantum of Solace at the wonderful Majestic Bay Theater. We saw the movie first. Despite disappointing reviews and so-so comments from friends, we liked it quite a bit. The story was weak but the action was great. I still think the title is stupid though.
After that, we scooted thru the Farmer's Market to get some honey. There were lots of street musicians around. The one in the pic caught my attention so I had to take a pic. We then went down to the Lockspot Cafe for fish and chips. My cousin Chris would love this place because there are autographs of all the fishermen from Deadliest Catch all over. The fish and chips were okay (certainly not as good as the ones we had in Friday Harbor) but the atmosphere was pure Ballard fishing community. After lunch we went over to the Locks for a minute, then headed back thru Ballard stopping at Archie McPhee's and a couple of consignment shops. On the way home we stopped at Larsen's Bakery because we had been curious about it. We bought a delicious dessert (cherry cream cheese twist) to take home.
The jeep was acting up so I took it in this morning. Our mechanic is Russian or something similar and he's a no nonsense guy. He called a while ago to tell me it's fixed. He's quick, dependable and reasonable. You can't ask for more in a mechanic these days. Guess I'll walk over and pick it up in a bit. I'll probably go by the bread outlet and the library on my way home. I had hoped to get some art done on my day off but I just don't think it's going to happen today.
Posted by What Would Jesus Glue? at 12:55 PM