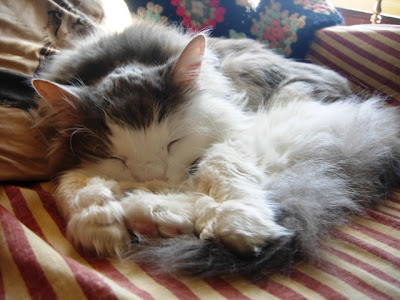 Last night around 10 we had to take our cat Mickey to the ER vet. We gave him his meds which he vomited up and then he couldn't walk straight. We called, they said come so we did. Turns out he had a vagal episode which is, basically, a fainting spell. It was rather scary though. Mickey's a trooper though. He's been on chemo for 1.5 years now for Inflammatory Bowel Disease. He's also anemic despite having a pretty good appetite. To see him you wouldn't know he was sick. But he is and we know we will lose him eventually but it's still hard.
The doc told us she thought his thyroid might be enlarged so we will make sure our vet checks that during his next blood test which is in a couple of weeks. Today, he's been sleeping a lot. When we got home last night he wouldn't come out of his carrier. When we got him out he hid in the closet. We let him be and this morning he got in bed with me. A little while ago he curled up on the couch next to me and went to sleep. He's still not eating great but his chemo ends today so we hope his appetite will pick up in the next day or so.
Sick cats are tough. I can't imagine having kids.
Posted by What Would Jesus Glue? at 12:04 PM