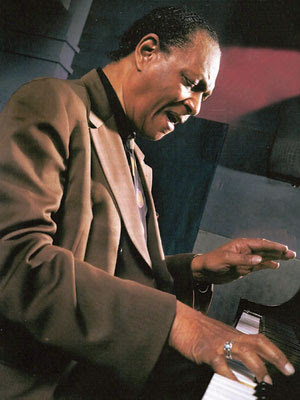 My friend Marshall and I went to see the McCoy Tyner Quartet last night at the Moore. He was accompanied by Marc Ribot on guitar; Gerald Cannon on bass; and Eric Kamau Gravatt on drums.
The music was good but the sound wasn't. It was very muddy. Another annoying thing about the show was that every instrumentalist had a solo...in every song. I'm all for soloing but...c'mon! Also, I know Ribot was positioned so he could see McCoy but he had his back to the audience. He's a guitar player. I want to see his hands while he plays.
There was a funny moment when, after 4 or 5 songs, McCoy got up, said something in the mike (again, terrible sound plus he has one of those raspy, jazz voices) and walked off the stage. None of the other guys said anything but based on the bass players face his inner monologue had to have been, "Where the hell is McCoy going? McCoy, get your ass back out here. We've gotta play some more songs." In a few seconds, McCoy strolled back on the stage, mumbled something in the mike about a broken watch then sat back down and played some more. I guess if you're 70 years old and a jazz legend, you can do whatever you want.
There were some interesting folks at this concert but none more interesting (my way of being nice and not saying annoying) than the ones directly in front of us. It was 2 couples; a dapper yet nerdy looking black man accompanied by a large white woman who wouldn't look out of place in a bowling alley and a white man (think bowling alley again) accompanied by a black woman who looked like she was going to church and apparently McCoy Tyner's biggest fan...sorta. The two women were slathered with perfume which caused my sinuses to rebel in a big way. McCoy's biggest fan sat thru the whole concert talking back like she was at church. She'd clap her hands and bob her head up and down, laughing and saying stuff like, "Yeah. Uh huh. That's right." But I suppose even McCoy Tyner's biggest fan has a limit. About an hour into the concert, they all just got up and left. Well, let me rephrase that. They made a big show of leaving. The concert only went on another half hour but I'm not complaining. My nose was thankful that they left.
All in all it was a good evening full of good music, good conversation with a friend and more than a healthy dose of people watching in Seattle. I won't even tell you about the transvestite on the bus. (think Fred Flintstone trying to look like Jackie Kennedy and you'll be close)
Posted by What Would Jesus Glue? at 2:07 PM