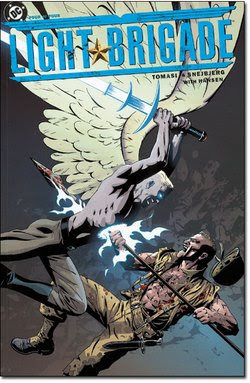 Light Brigade by Peter J. Tomasi and Peter Snejbjerg
"There's a war in Heaven and Earth is the battleground!In the cold, dark days of December 1944, as World War Two rages, Chris Stavros - an Amercian soldier - has but one goal: getting home safely to care for his son after learning his wife has died. But in the midst of battle and trying to stay alive, he finds the stakes raised as heavenly warriors emerge from the skies - resulting in an impossible task given to Stavros and his platoon: recover the lost Sword of God before a troop of arcane, unkillable German soldiers locate it and storm Heavens Gate! These American soldiers, this "Light Brigade," will now begin a supernatural crusade that will determine the fate of the world...one bullet, and one soul at a time!"
I really loved this graphic novel. I'd never heard of it but I saw it at the library and decided to give it a go. I'm glad I did. It's like Saving Private Ryan with zombies and angels. You can't really go wrong with a combination like that.

Knightfall parts 1, 2 and 3 by various artists and writers
I also found this at the library; the story arc chronicling Bane's defeat of the Batman and the rise and fall of Jean Paul Valley as the new Batman. I never read this when it first came out so I figured I'd give it a chance. It was okay. The story was interesting but most of the art left me cold. A story has to be some kind of fantastic for me to overlook so-so art. It had it's moments. I'm glad I read it...probably won't read it again.
Posted by What Would Jesus Glue? at 4:47 PM