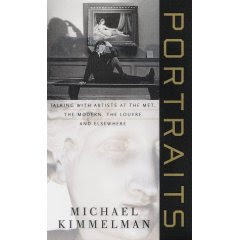 Portraits: Talking with Artists at the Met, the Modern, the Louvre and Elsewhere by Michael Kimmelman
This is my second book by Kimmelman. I like the way he writes about art. He talks about it in a way that is more accessible than your typical art professor. In this book, he doesn't so much do the talking as the listening. He met with well-known artists at a museum and got their impressions of their own work and the works of others. I learned alot from these conversations. It was refreshing to me that most of the artists didn't talk about art as if they were reading from a Star Trek tech manual. Many of them expressed disdain for highmindedness when it came to talking about art. They expressed themselves eloquently, simply and with passion. Many of them explained how they feel as though they haven't got it figured out yet. It's quite a relief to hear one's art role model confess that. But it's true. I don't think you can ever figure it out. You just have to keep working at it, chipping away at the block bit by bit, feeling satisfied with the sore muscles and slight headache that can only come from the act of creation, and feeling anxious to do it again tomorrow.
Posted by What Would Jesus Glue? at 3:09 PM