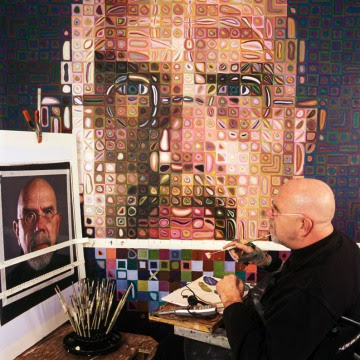 "What moves me about Seurat's are in the incremental, nuanced, part-to-whole way his paintings are built out of elegant little dots, though I feel even more of a kinship with Roman mosaics because the mosaics are made out of big, clunky chunks, and I especially like the idea that something can be made out of something else so different and unlikely. In Roman mosaics, an eyeball is made from the exact same chunk of stone as the background, and this brings up the concept of alloverness and Jackson Pollock. It's what I aim for in my own work, an alloverness that's different from what most portraitists do by putting all of their attention into the eyes, nose and mouth."
"My daughter once asked me if I was alive when the world was black and white, which is a pretty amazing thing to say, when you think about it, because everything she saw that was old on TV was black and white."
"I remember being asked by some children once, 'Do you work from photographs or can you really draw?' as if looking at a photograph means you're not really looking, as if you're cheating..."
"I've always wondered how a magician watches another magician perform: does he see the illusion or the device that makes the illusion? For me, the thrill as a painter is not only seeing what another painter has made but how he or she had made it. And I think one reason painting continues to have urgency, when so many so-called experts like to say it is dead, is that there is something about the smearing of colored dirt on a flat surface and denying the flatness through the illusion of depth which retains its original magic from the days of the cave painters and which can never be denied."
Source: Portraits by Michael Kimmelman
Posted by What Would Jesus Glue? at 2:52 PM