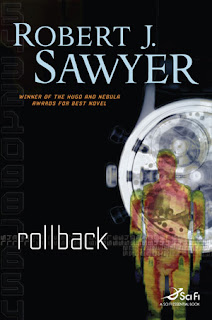 Rollback by Robert J. Sawyer
"Dr. Sarah Halifax decoded the first-ever radio transmission received from aliens. Thirty-eight years later, a second message is received and Sarah, now 87, may hold the key to deciphering this one, too . . . if she lives long enough.
A wealthy industrialist offers to pay for Sarah to have a rollback—a hugely expensive experimental rejuvenation procedure. She accepts on condition that Don, her husband of sixty years, gets a rollback, too. The process works for Don, making him physically twenty-five again. But in a tragic twist, the rollback fails for Sarah, leaving her in her eighties.
While Don tries to deal with his newfound youth and the suddenly vast age gap between him and his wife, Sarah struggles to do again what she’d done once before: figure out what a signal from the stars contains. Exploring morals and ethics on both human and cosmic scales, Rollback is the big new SF novel for 2007 by Hugo and Nebula Award-winner Robert J. Sawyer."
I've read quite a few books by Sawyer. He is perhaps my favorite author in the sci-fi genre. The reason for that is quite simply because among all the techno-babble and hard sci-fi concepts being thrown around, he never forgets the characters. His books are always populated by wonderfully developed, complex, flawed people that you can invest in. His plots are always related to some sci-fi idea but the development and outcome of this idea is played out through the lives of the characters. Rollback is no different. It's a wonderful read. I can also highly recommend Calculating God, The Terminal Experiment and FlashForward (my fave) by this author.
Posted by What Would Jesus Glue? at 9:12 AM