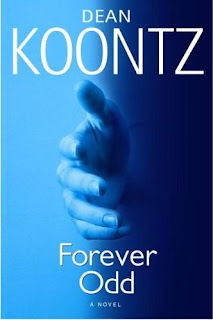 Forever Odd by Dean Koontz (audio)
This is the second novel in a series chronicling the crime-solving adventures of Odd Thomas, a young man with the supernatural ability to "see dead people." In this tale, Odd uses his gifts to aid a friend in distress.
I reviewed the first book a while back and never mentioned anything negative because the overall experience was good. I cannot say that about this book. The negatives reared their ugly heads and remained there unvanquished by a lackluster story. The story is told from the perspective of Odd. During times of action or dialogue, the story flows naturally but during times of slow description and exposition, the language becomes flowery and, in my opinion, unnecessary. It's as if there are two narrators or perhaps Odd has 2 personalities. These flaws were in the first book but anytime I thought I was about to be caught up in a lag, the story bolted forward. That didn't happen this time. I believe this book could have been at least half it's length. I know that the author was trying to build suspense but all he did was build boredom. The story wasn't nearly as interesting as the first book. It was pretty straightforward with no twists or turns. All in all, a pretty unsatisfying listen.
I still like the character of Odd Thomas and also some of the supporting characters. I know that there is a third book and I want to know what happens to him but I don't want to be bogged down in a swamp of slow moving plot again. So, I guess I'll wait a while until I'm really desperate for something to read or listen to.
Posted by What Would Jesus Glue? at 2:26 PM