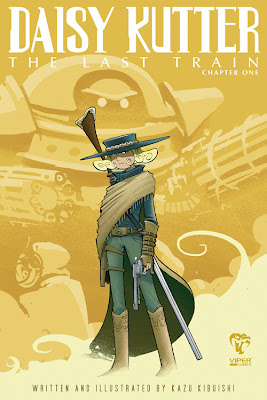 Daisy Kutter: The Last Train by Kazu Kibuishi, Ghost World by Daniel Clowes, Flight Volumes 1, 2 & 3: Edited by Kazu Kibuishi
Every once in a while I pick up some graphic novels at the library. They have a pretty good selection and I usually find things I won't necessarily buy but that I don't mind reading. I finally got around to reading the stack I had picked up over my last few visits.
Daisy Kutter is the story of a female gunslinger/outlaw set in a steampunk New West. She is persuaded to take on one final heist so that she can get out of debt and, as is the case in these kinds of stories, everything goes wrong. The story is pretty straightforward but there's enough there to make it interesting. The reason I picked it up was for the artwork. Kibuishi is a new find for me. I discovered his work in the Flight anthologies I also picked up. His work is cartoony but not so much so that it detracts from telling a somewhat serious story.
Speaking of Flight, these books are full of stories and art by a bunch of folks I've never heard of but what a discovery. Some of the work here is fantastic. (Every anthology has a few duds here and there) Most of these are also rendered in a cartoony style but the variety of styles is endless. I would consider buying these if I came across them at a good price...just to have them in my library as a reference for great cartoon art. Some of the stories aren't bad either.
Last but not least, I'll turn my attention to Ghost World. I'm not one to read the edgy, underground type comics (or whatever they're called today) unless the art interests me. I have been familiar with Clowes for a number of years but haven't been a fan. I finally picked up GW because we saw the movie a few weeks back and liked it so I wanted to compare the book to the movie. They are totally different animals. The movie did one up the book by pulling together the plot with an element of a continuing storyline. The book just meanders disjointedly through the girls everyday world. I am disappointed that there are some things in the book that should have made it into the movie. After experiencing both, I am inclined to think that they compliment each other. They are separate entities but neither detracts from the other's success at telling a part of the story. I am also more appreciative of Clowes' style. It's subtle and quite fitting for communicating the stories of the offbeat people he chooses to highlight.
Reading these (and all other comics) makes me want to attempt my own comic again. Perhaps I will when a story I feel like telling comes to mind.
Posted by What Would Jesus Glue? at 8:52 AM