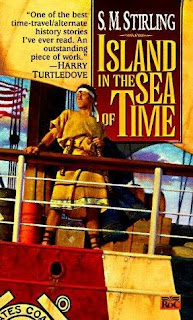 Island in the Sea of Time by S. M. Stirling
"A colossal dome of fire and a violent storm shift the universe, reduce the North American continent to wilderness, and sweep the island of Nantucket into the year 1250 B.C., placing its inhabitants in a battle for survival."
It took me 3 weeks to finish this book. I really enjoyed it but I'm not a fast reader to begin with and it's a fairly dense book, chock full of descriptions and the like. It just took me that long to take it all in. Stirling is a good writer and he makes it all seem so capable of really happening. I liked the characters and the relationships that were established. I'm not a big fan of war in books though. I just don't like reading descriptions of battles. Just tell me there was a battle and so and so won and I'm good.
There are 2 more books in this series but I'm not sure I've got it in me to tackle them anytime soon. I did the same thing with Dies the Fire. Read the first one, enjoyed it but didn't read any further because it's not a light read. Call me shallow but I like to read at night to turn my brain off. I can't do that with these books.
Posted by What Would Jesus Glue? at 5:53 PM

You're right, Stirling packs a lot into his books.
I've read all of the Nantucket series and then the Dies the Fire trilogy.
I haven't started the next set.
I've put the James Hogan novel, "Thrice Upon a Time" in the mail for you.