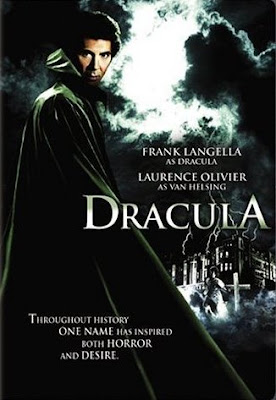 Sarah and I watched Masterpiece Theater's version of Dracula the other night. It was dreadful. Before that we tried to watch the BBC's Count Dracula from the 70's but just couldn't get into it. So, I still have a hankering to see a good version of Dracula this Halloween season. Is there a good one?
I have no time for research so let me answer that question from the cobwebs of my memory.
The earliest version I can think of is Nosferatu. It's a silent film therefore it is dated. I'm sure it was scary in it's time. Max Schreck looks incredible in the lead role.
I suppose Bela Lugosi's version is next. A pretty good film. I found the lack of music to be disconcerting. Dwight Frye is creepy as Renfield.
I know this is hard to believe but I've never seen any of the Christopher Lee Dracula movies. I saw the trailers when I was a kid and they scared the hell out of me. I am trying to get the first one from the library as we speak.
In the late 70's, Frank Langella brought his Broadway version of the Count to films. In my opinion, it is the best of all the Dracula films. Frank Langella is simply amazing in the part. I wish I could have seen him on Broadway.
There are others I have seen that are barely worth mentioning. Dracula: Dead and Loving It made me feel embarrassed for Mel Brooks. Dracula 2000 had the ridiculous premise that Judas Iscariot became Dracula. Francis Ford Coppola's Dracula had Gary Oldman as Drac and Anthony Hopkins as Van Helsing and it still managed to suck out loud. Blade 3 had Wesley Snipes battling a hip, buff Drac. It sucked so bad.
I'm sure there are others but I just can't think of them right now. Chime in and tell me what your favorite Dracula film is. You may have seen one that I've missed.
Posted by What Would Jesus Glue? at 6:00 AM

When a vampire movie "sucks," can that be interpreted as a compliment?

I didn't see the whole thing, but what I saw of the Salem's Lot they made for TV with Rob Lowe was pretty good. They changed the ending a little (to fit better with Callahan showing up in the last few Dark Tower books, I think) but I still liked it okay.

I didn't like the Rob Lowe version of Salem's Lot. I still prefer the 70's version.

I honestly haven't liked any of the Dracula flicks.

I suppose I'd give a nod to Abbot & Costello Meet Frankenstein as a fav Dracula film, not because of Drac, but because of the antics of A&C.