Halloween Countdown: Costumes from the Past 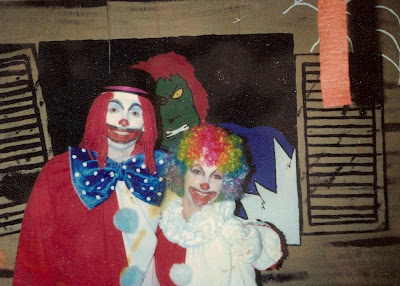 This was taken at a church Halloween party for the college department sometime in the early 80's. It was in an old barn behind someone's house. I painted the backdrop we're standing in front of. If I'm not mistaken there was a mock funeral during this party. Surprisingly enough, I don't think I had anything to do with that.
The clown girl is Jeanette. Not an old girlfriend, just a friend. I don't know why we decided to be matching clowns...just the thing to do I guess. Her mom made her costume and my Aunt Betty Lou made mine. I actually made the wig I'm wearing.
I used that clown costume numerous times over the years. My friend Darren wore it in New York during a mission trip. The last time I wore it I was told I looked like John Wayne Gacy. Nice. I think it finally gave up the ghost a few years ago and we chucked it.
It's weird to me that I would dress up as a clown. I don't really like clowns.
Posted by What Would Jesus Glue? at 6:00 AM