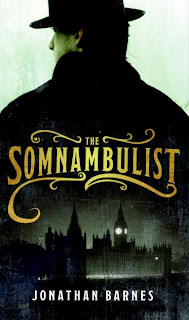 The Somnambulist by Jonathan Barnes
The story revolves around magician Edward Moon and his partner, the giant mute called the Somnambulist. In post-Victorian England, Moon is called upon to help solve the mystery surrounding several strange murders.
This book started with much promise and, by the end, devolved into a great big mess. I read to the last page and I still don't know what happened and I really don't care. Barnes is obviously a very creative fellow but let's at least have a plot that goes somewhere and makes a bit of sense. Just tossing weird creativity around willy-nilly doesn't do it for me. Unfortunately I have read quite a few books that are like this. I guess some people don't need a plot. They just need weirdness. To each his own. I would have at least liked an explanation of who or what the Somnambulist was. It is the the title of the freakin' book!
Posted by What Would Jesus Glue? at 4:00 PM