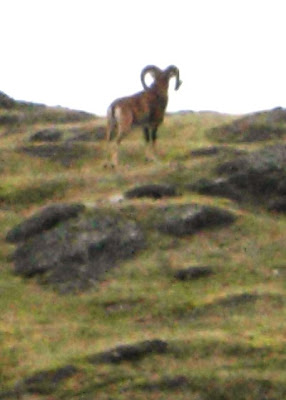 We slept in just a bit and went into town for brunch. We had a great meal at the Blue Dolphin Cafe. I had eggs benedict w/ hash browns and ordered a pancake on the side. It was just one pancake but it was huge. Sarah helped me and we still didn't finish it.
After brunch, we wandered around town until it was time for our whale watching tour. The weather was much better than the previous. Cloudy but no high winds. We finally boarded the Sea Lion, a San Juan Safaris boat, for our tour. We were greeted by our co-captains/naturalists Peter and Nancy. They gave us the rundown and we headed out. We didn't see any whales but we had a great time nonetheless. Highlights include the island of horny rams (no kidding-it was skirt chasing time), the stellar sea lion who stole a salmon from a tiny harbor seal, the island of cormorants and gulls, and the Dahl's porpoises that swam along the bow of the boat. We also saw a couple of bald eagles and some large pink jellyfish along the way. Sarah struck up a conversation with a couple on the boat and it turns out they live about 12 blocks away from us. Small world.
Once we got back, we booked it over to Lime Kiln Point State Park to view the cloudset. (there was no sun to speak of) While there we saw another harbor seal lounging on a rock. Sarah swears he was posing for me. I took some more shots of the lighthouse and then we headed back into town for dinner, stopped by the authentic NY pizza joint for some cannoli (this guy's name was Vinnie and he was straight out of Brooklyn), and went back to the room for the second Harry Potter flick.
Day 4 coming soon.
Posted by What Would Jesus Glue? at 3:06 PM