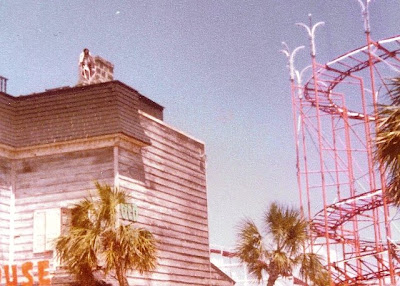 I've spent my fair share of time exploring haunted attractions as I've had the opportunity. I've been to the Haunted Mansion at Disneyworld. I've been to many, many local haunted houses in the various places I've lived. I've been on the haunted rides at the many carnivals and fairs I've attended over the years. In fact, one of the most memorable times I had in one was when me and two buddies made friends with one of the guys working in one of them. We were wandering thru, being smart asses, going where we weren't supposed to go, scaring people and this guy asks us if he can bum a cigarette. He was a little person which we thought was way cool. We hung out with him for a bit before he had to go back to work and then we went on our way.
The pictures are from the Haunted Castle at Miracle Strip Amusement Park in Panama City, FL. The youth group from church made a trip there probably around 1978. I remember it being a fun day and the first time I ever rode a roller coaster. I've been hooked ever since. I don't remember much about the Haunted Castle beyond these pics. I do remember a ride called the Abominable Snowman that was really great. Like I said, fun day.
I wish I had pics from other attractions. I remember a haunted house at Six Flags Over Georgia where they had a spider pit. There were voices crying out, "Go back. Go back. The spider's will get you." As you can see that made a pretty big impression on me as a kid. I've thought about taking in one of the local haunted houses but I find that they aren't worth the money. If I could visit one like the one in that video I posted a couple of days back about High Tech Haunted Houses, sign me up. But usually the local houses are pretty lame. Anybody ever been to the one in Seattle that can give me a review? 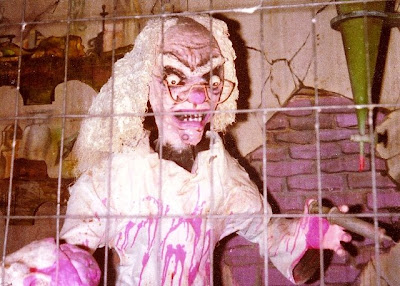 i went to miracle strip a few times when i was a kid...i don't think they changed anything! grant and i also loved the abominable snowman ride. good ol' panhandle memories...