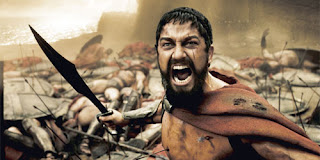 Mild Spoiler Alert!
We saw the movie on opening day. It's odd but I didn't really know what to expect. I was really looking forward to seeing the film based on trailers but it's one of the few graphic novels of Frank Miller's that I have not seen or read. That being said, I had no way of knowing if it matched Miller's vision or not. We had talked about the story in our class at church on Sunday mornings so I was curious about seeing it for that reason. And it looked like a way cool movie to see.

I liked it but it didn't blow me away. One review I read made it sound like it was groundbreaking like The Matrix. It was not. It was visually stunning though. I can't say the script was brilliant because it's sparce and basically boils down to a lot of scenery chewing, testosterone laced yelling. Butler is good at that. The subplot with the queen was unnecessary and, as I understand it, not in the graphic novel. They also made some odd choices. The effect they used on the voice of Xerxes was a bit too technical. It sounded like every other technically affected voice used in the movies. What was their reason for doing that? To make him sound more godlike? It didn't work. It just sounded cheesy. Also, because of Lord of the Rings, I am a fan of David Wenham (Faramir) but I don't think he fit in with the other warriors. He looks more like a Norseman than a Spartan. His voiceover struck my ear in strange way. Even though he's a young man, his voice has an older quality to it. It also seemed too refined, too upper-class British for a warrior of Sparta. And if you want to talk about voices, Butler was good as Leonidas (the look they gave him was excellent) but his Scottish brogue peeked through from time to time.
All in all, I enjoyed the film but it was less than the perfect movie going experience. I would have to say that I enjoyed Sin City far more than 300. I'm sure I'll see it again after I've read the graphic novel and, perhaps with that reading, I'll enjoy it more.
Posted by What Would Jesus Glue? at 7:38 AM