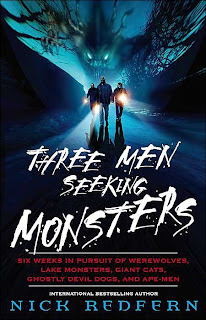 Three Men Seeking Monsters: Six Weeks in Pursuit of Werewolves, Lake Monsters, Giant Cats, Ghostly Devil Dogs, and Ape-Men by Nick Redfern
In this book, author Nick Redfern recounts his team up with professional monster-hunters Jonathan Downes and Richard Freeman during the summer of 2001. The three men spend six weeks travelling all over Great Britain searching for answers to they mysteries behind some of the world's spookiest legends and the creatures behind them.
I grabbed this book at the library because I had heard that Universal Pictures had snapped up the rights and intended to make a comedy/horror film out of it. Everyone who knows me knows I love a good monster story, especially one with a bit of humor too it. I'm sure it will have a kind of Scooby-Doo/Ghostbusters vibe to it. I have a feeling that when the movie gets made it will not resemble the book in the least and that may not be a bad thing. I love to think that there might be such things as UFO's and Bigfoot and the Loch Ness Monster. It's fun to think that there's more things in heaven and earth than are dreamt of in my philosophy...or Horatio's for that matter. I think the problem with this book was that it was a bit too unsettling to realize that these guys really buy into this stuff...so much so that they spend their entire lives hunting for monsters. That seems a bit off the deep end to me. Sure, it was fun to read about their exploits but, for the most part, these guys weren't really doing anything too terribly funny. They were dead serious about all this. The main thesis that drives these guys is that they believe that more than one supernatural event occurs in any given area. Say, for example, that a town experiences a UFO report. It will also experience reports of other sightings such as the Man Monkey or a Devil Dog or what have you. They say that this is done for a reason. That all of these beings are supernatural and that they thrive on our emotions, especially fear, to keep them alive. There's more to it than that but that's all I'll say on the subject.
All in all, it was an okay read but not one I'd recommend to anyone else unless they were into this kind of stuff. I think the movie could be funny but I feel like it will become a second-rate Ghostbusters wannabe.
Posted by What Would Jesus Glue? at 9:56 PM

I read this really freaky, but very good book called "Little Green Men", or at least that's what I think the title was... A Christian author postulates that most of the monster/supernatural experiences people have are actually demonic. Don't know for sure of course, but their use of scripture, and their technical info about the improbability of aliens and life on other planets convinced me that they're probably right. Jake's got a fantastic story about an alien visitation experience he and a couple friends had down in Tucson and one of my seminary friends had a pretty good alien visitation story on her farm in Georgia... Kind of 'right' somehow to think of those two stories as having a spiritual backdrop rather than a monster explanation.