The Beat of a Different Drum 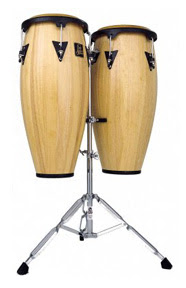 I bought a set of congas from a friend which enabled him to buy a drum set. It was a win-win situation for both of us. Now, it's going to be a matter of setting aside some money for lessons and finding the time to practice. Unfortunately, lessons will have to wait until at least April due to other financial obligations. Poor Sarah has to put up with my accumulation of toys. I already have a djembe that we don't have room for. I guess some future house of ours will have to have a drum room in addition to an art studio. I believe if we had ten bedrooms it still wouldn't accommodate all of our hobbies and interests. Let's see...a house with ten bedrooms in Seattle would cost about...uh...a trillion dollars! So, we push things aside and make room in the studio which, by it's very nature, doesn't have to be tidy.
Now, where was I? Oh, yes. The drums. Cool. Uh...I think I'm finished now.
Posted by What Would Jesus Glue? at 1:07 PM