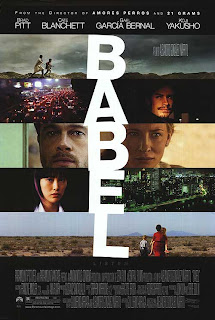 Sarah and I watched Babel last night. After all the hullabaloo with the Oscars, my curiosity got the best of me. The reason I didn't want to see it was because of Brad Pitt. I'm so over him. I'm like that. I get sick of hearing about people so I avoid their movies. Sarah's that way about Tom Cruise.
So, we watch the film and it's a tough watch. Not that it's a bad movie...it's actually a good movie...just tough to watch. I usually don't like movies like this. I told Sarah this and she asked why. I then said, "Because they're too real." Watching this movie was like watching the news. It reminded me of all the bad in the world. And when you get to the end of the movie, there's no good news. Everything is still bad. I know the world is like this. I just don't like to dwell on it. We talk about truth in art in our artists group all the time. This movie had truth in big, ugly doses.
I guess that's why I'm a sci-fi, fantasy, and comedy guy. Don't get me wrong. I love a good film and I'll give Babel all the props it deserves. But when I sit down to watch a film or read a book, 9 times out of 10, it's going to be for reasons of escapism. Give me the movie where Sasquatch monsters from Guam are riding giant tidal waves toward the east coast and they are going to wipe out life as we know it but, in the end, someone saves the day and all is well and man will persevere. I like that. I guess I want an ending that has a glimmer of hope.

"The Grand essentials of happiness are: something to do, something to love, and something to hope for." - Allan K. Chalmers
Posted by What Would Jesus Glue? at 9:02 AM