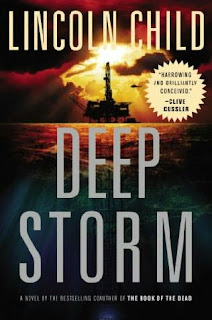 Deep Storm by Lincoln Child
"Deep Storm' is the most spectacular science research facility ever constructed. Lying deep beneath the Atlantic on the ocean floor, the heavily guarded structure has been designed for one purpose: to excavate a recently-discovered undersea site that may hold the answers to a mystery steeped in centuries of myth and speculation.
Peter Crane, a former naval doctor, is summoned to a remote oil platform on the Atlantic to help diagnose a medical condition spreading through the rig workers. When he arrives, however, Crane learns that the real trouble lies far below the rig. Sworn to secrecy, he descends to the ocean floor and the science station Deep Storm, where a top-secret team is investigating a remarkable discovery. A year earlier, he is told, routine drilling uncovered the remains of mankind's most sophisticated ancient civilization: the legendary Atlantis. But now that the site is being excavated, a series of bizarre illnesses has erupted among the workers. As he tries to discover the cause, Crane realizes that the covert operation conceals something far more complicated than a medical mystery - and that ‘Atlantis' might, in fact, be something far more sinister and deadly."*
I didn't enjoy this book. I would have put it down but I've always somewhat enjoyed Child's books and I thought something good would eventually happen. Nothing ever did. I feel like the premise of the story had promise but it was not fully developed. I actually believe that we could have had a better book if it had started at the end and proceeded from that point in the story. I can actually envision a sequel that would be ten times better than this book.
For those of you who like a Crichton-esque story, this fits the bill. But Crichton's books have grown weak and so have Lincoln Child's.
*Source: fantasticfiction.com
Posted by What Would Jesus Glue? at 9:11 PM