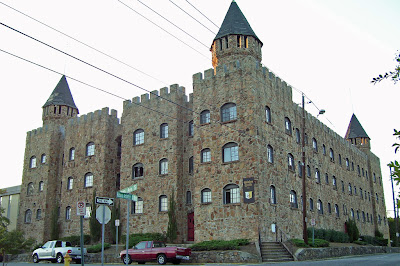 I started a new book last night. The book is set in Birmingham, Alabama. At about page 18 I discovered that one of the characters lives in the apartment building that I lived in while in Birmingham. How do I know that? Because the apartment building is Quinlan Castle and it is unique.
I moved to Bham in January of 1996. I had just finished seminary and had joined a group of my former Company teammates (the Company was Southwestern Seminary's touring drama team) in a new touring group called Face to Face. I stayed with Mike for a few days until I could find a place of my own. Rebecca drove me around the downtown area one day so we could find me a place to live. When we passed Quinlan Castle, I fell in love with it immediately. We copied the number down, I called and, before I knew it, I was a resident of the castle. One day after I moved in, an ice storm hit Bham and I was stuck in my castle for about 5 days. My girlfriend at the time lived about 30 minutes away so we burned up the phone lines. One of those stuck days was my birthday. It was pretty miserable. Kem made up for it by taking me out for a nice dinner after it was all over.
It wasn't the most comfortable apartment I've ever lived in. The AC was one of those huge, clunky hotel window units. It consumed electricity at an alarming rate so I went without that summer. (Yes, it was hot) Basically all I used it for was decoration. I bought some of those alphabet magnets and spelled out, "A man's home is his castle" with them on the side of the unit. In the winter, the walls in my bedroom sweat so bad that water dripped down the walls. When they painted the bathroom, they used the wrong kind of paint and it started to peel after a few weeks of use. But, all in all, it was an okay place. It was actually perfect for a bohemian like myself. It was near the Five Points area of Birmingham, a neighborhood bustling with restaurants, shops and clubs. The apartment and it's surroundings had character. And I could tell people I lived in a castle.
It was there at the castle that I met my friend Antjuan, an extremely talented artist who lives in San Fran now. The way we met is a funny story. At the time, I was thinner than I am now. I had a full beard, long hair (no gray) and usually only wore cut-offs and sandals. (which I still do in the summer) Antjuan is a tall, handsome black man. I guess we had seen each other going to and fro but never spoke. One day, he knocked on my door and asked if he could borrow a broom. He saw my artwork and asked if I was an artist. I said yes. He acknowledged that he was an artist too and our friendship started with a whirlwind of art talk. After we felt comfortable with each other he told me that he almost didn't approach me because he thought I was a biker dude and that I wouldn't like black people.
It was soon after we met that I moved back to Pensacola to pursue finding a church position. Antjuan and I traded paintings and have kept in touch sporadically since then. I cut my hair off, did 2 more performances with Face to Face in South Carolina and, before long, found myself in SC as a youth minister at a Southern Baptist church.
The castle was in pretty good shape when I moved in. They had renovated it into lower-income housing. I found out that before that time, it's nickname was Crack Castle due to the seedy patrons who haunted it's halls. Security gates had been installed so it was much better when I lived there. I understand it's sitting empty now and the city is trying to decide what to do with it. I wish I were a rich man. I'd buy it and do something with it. It deserves to exist and have a purpose.
I'm glad that I was reminded of the castle. Despite it's flaws, I loved living there. It seemed like the type of place an artist should live. It felt like home.
Photo Source: http://dresramblings.wordpress.com/2006/10/14/random-shots-options-a-plenty-for-the-castle/
Posted by What Would Jesus Glue? at 9:25 AM

Thanks for using my picture of the castle. If you could link to it so others know where it came from, I'd appreciate it. Thanks.