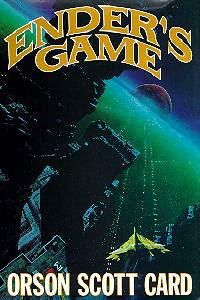 Ender's Game by Orson Scott Card (audio)
"Intense is the word for Ender's Game. Aliens have attacked Earth twice and almost destroyed the human species. To make sure humans win the next encounter, the world government has taken to breeding military geniuses -- and then training them in the arts of war... The early training, not surprisingly, takes the form of 'games'... Ender Wiggin is a genius among geniuses; he wins all the games... He is smart enough to know that time is running out. But is he smart enough to save the planet?"*
The first time I read this book was so long ago I can't remember when. I do remember loving it. And so, having discovered that there are a ton of sequels I haven't read, I decided to listen to the book in preparation for getting the sequels. All I can say is the book is brilliant. It is so timeless and it touches on themes that will resonate with humanity for ages to come. I believe this book will be around for a long, long time. Has it been around long enough to be considered a classic? I'm not sure but if it's not considered a classic...it will be. If you haven't read it, go get it right now!
*Source: amazon.com

i love this book and have read all of the sequels!!!dra

Ender's Game is excellent, as are some of the sequels. I particularly enjoyed following Bean's story arch. However, other sequels are to be avoided. Yech. There was one I couldn't bear to finish. I can't remember which one (my mind obligingly blocked it out) - I'll have to go look...

I agree with Chagrin. I LOVED Ender's Game, but some of the sequels are truly completely awful... I haven't even read them all 'cuz the two I did read were so icky; however, I'll probably try reading the stories following Bean...