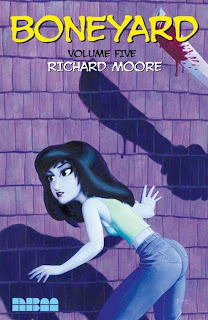 Boneyard: Volume 5 by Richard Moore
"It's fright night in the funny pages! The legendary spoof horror is back for a fifth volume of slashingly good fun! Abbey, Michael and the Boneyard gang have a threat to contend with - again - and it's got more prongs than a devil's pitchfork. Well, it's actually got the same number of prongs as a devil's pitchfork - two - but it's pretty scary and the crazy kids at the 'yard aren't happy about it. On the one hand, there's a huge masked chainsaw-wielding, um, massacrist in a girls' summer camp - and on the other, if it doesn't get lopped off by the buzzsaw, there's the Pumpkinhead, whose very presence puts all in the 'yard to fevered sleep. Not good when you're trying to save the world from unspeakable evil. Abby barely survives the confrontation with the masked loony - and now it's up to Michael to face the worst threat...with Nodoze and a baseball bat, more legendary loopiness from the insanely talented Moore."*
Michael, Abbey, Nessie, Brutus and the rest of the Boneyard gang are back! I didn't find this volume to be as good as some of the others but it was still fun to read. I just love what Moore has done with the classic monsters (vampire, werewolf, Frankenstein, etc.). Anyone who can make a Creature from the Black Lagoon sexy is oddly brilliant in my book.

Mass Appeal by Bill C. Davis
"Tim Farley is the pastor of an affluent, suburban Catholic parish. He's highly popular among his parishioners because of his charm, his wit, his easy-going manner and his entertaining (but unchallenging) sermons. Young deacon Mark Dolson interrupts Farley in the middle of a sermon, to challenge his stance on the ordination of women. Farley is simultaneously outraged and intrigued by the young deacon, and asks to have Dolson assigned to work with him. Dolson is an idealistic firebrand, who's eager to change the Church. He enjoys attacking Farley's "song and dance theology" and questioning why Farley drinks so much. Dolson thinks it's his job to shake parishioners out of their complacency. Farley likes Dolson, but sees that he'll never succeed as a priest if all he does is hector people and make enemies. Each man has something to teach the other about how to perform his priestly duties."**
I had seen the movie years ago and really, really liked it. (it is, unfortunately, not available on DVD) When I saw the play sitting on the shelf at Taproot, I just had to read it. It's very good and addresses many concerns about faith and the church that are still relevant today. It's not as powerful as Doubt but it has some things to say that are important. I especially liked the part where Mark preaches about his fish. I won't ruin it for you but there are some pretty powerful metaphors lurking within that little illustration. I hope I get to see this play on stage sometime. It shouldn't be just read but experienced.

The Conqueror Worms by Brian Keene
I won't include a description on this one. Let's just say it's about a bunch of people trying to escape...you guessed it...some giant worms. What can I say? I'm weak. I like to read a good monster story sometimes. Unfortunately, this wasn't a good one. It was so-so. In the middle of the book, the story takes a side trail where we end up with a bunch of people trying to escape...any takers...some weird sea creatures including a killer mermaid and a mutant octosquid. The main thrust of the book is that it's pretty much the end of the world because it's been raining solid for about 2 months with no relief in sight. Almost everything is underwater except for some mountains. That's where we get the Attack of the Giant Earthworms story. I don't know. This book could have been a great B-movie type read but the story plunged and jerked all over the place. I wasn't sure what was going on half the time.
The moral of this story is...well, there is no moral. Let's just say it's an indictment of what kind of crap I will read when I'm hard up for books.