Cruisin' on a Sunday Afternoon 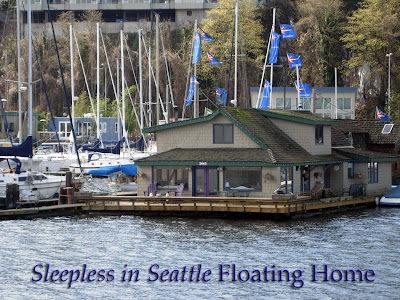 The weather in Seattle is unpredictable but, as luck would have it, we picked a great day for a cruise. It rained on Sat. and it's raining today but on Sunday, the weather was grand. It was sunny and semi-warm. It's probably the last of our Argosy Cruises for a while since our annual pass is up on the 24th. It's definitely been worthwhile to be able to jump on a boat at our leisure this past year. We'll miss it but we're going to do some other things this year. If we miss it terribly, we'll get one again in a years time.
This cruise was pretty much like any other with a few exceptions. The trip was reversed this time, starting at Lake Union and ending at the Seattle Waterfront. It took us forever to get through the locks. Just past the locks, there was a teenage boy on one of the docks. He was blowing a trumpet and shaking/spanking his butt. He put on quite a show for us. On the boat there was a group of college girls on Spring Break. They were pretty spread out but toward the end of the trip they gathered in the seats around us and chattered as college girls do. We saw a few sea lions in the distance sunning themselves on a sea lion cage (a platform built for them to lounge on). One supposedly swam by the boat but I never saw it.
As I said before, I will miss the cruises but I think we'll make up for it by taking a few ferry rides this year. They're pretty cheap. Also, we have some coupons for the cruises if we get desperate to be out on the water.
Posted by What Would Jesus Glue? at 9:55 AM